Healing with The Rose at Roadrunner

A line of people stretches around the Roadrunner, bustling with the excitement of fans who have been camped out for hours before the doors have even opened. People flow into the arena, a wide room with a standing area and a balcony, energy palpating around the space. Onstage stands a few guitars, a drum kit, and giant statues of black roses (a shoutout for the fandom name: Black Roses). Near the doors, people stand handing out banners with messages of support for the band and DIY headbands threaded with LED lights and flowers. 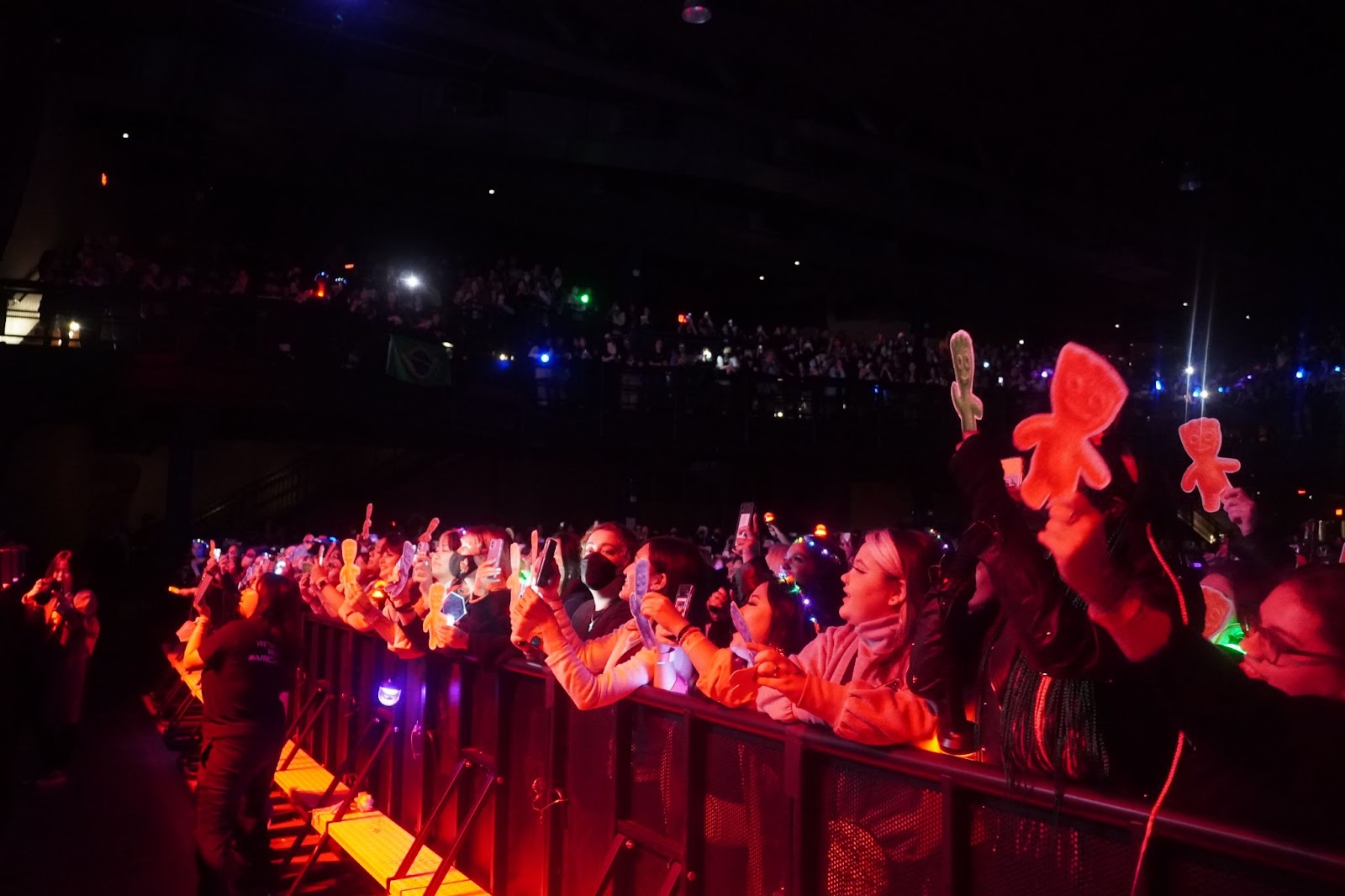 Everyone here is gathered for The Rose, a self-producing pop rock band from South Korea, who are in Boston for their HEAL TOGETHER world tour. Formed in 2017, the group is comprised of four members: Woosung (vocalist/guitar), Dojoon (vocalist/keyboard/acoustic guitar), Hajoon (drummer), and Jaehyeong (bassist). HEAL, which was recently released on October 6th, is their first full-length studio album and a driving force behind the tour.

The stage lights turn dark as the members enter the stage, carefully tuning their instruments and taking their places as the fans scream. Woosung begins the concert with a delicate acapella solo for “Definition of ugly is”, the third song off the album HEAL. The band transitions through a series of their more sentimental songs, including “Insomnia” and “She’s in the Rain,” before dancing with the crowd for their hit song “Red.” 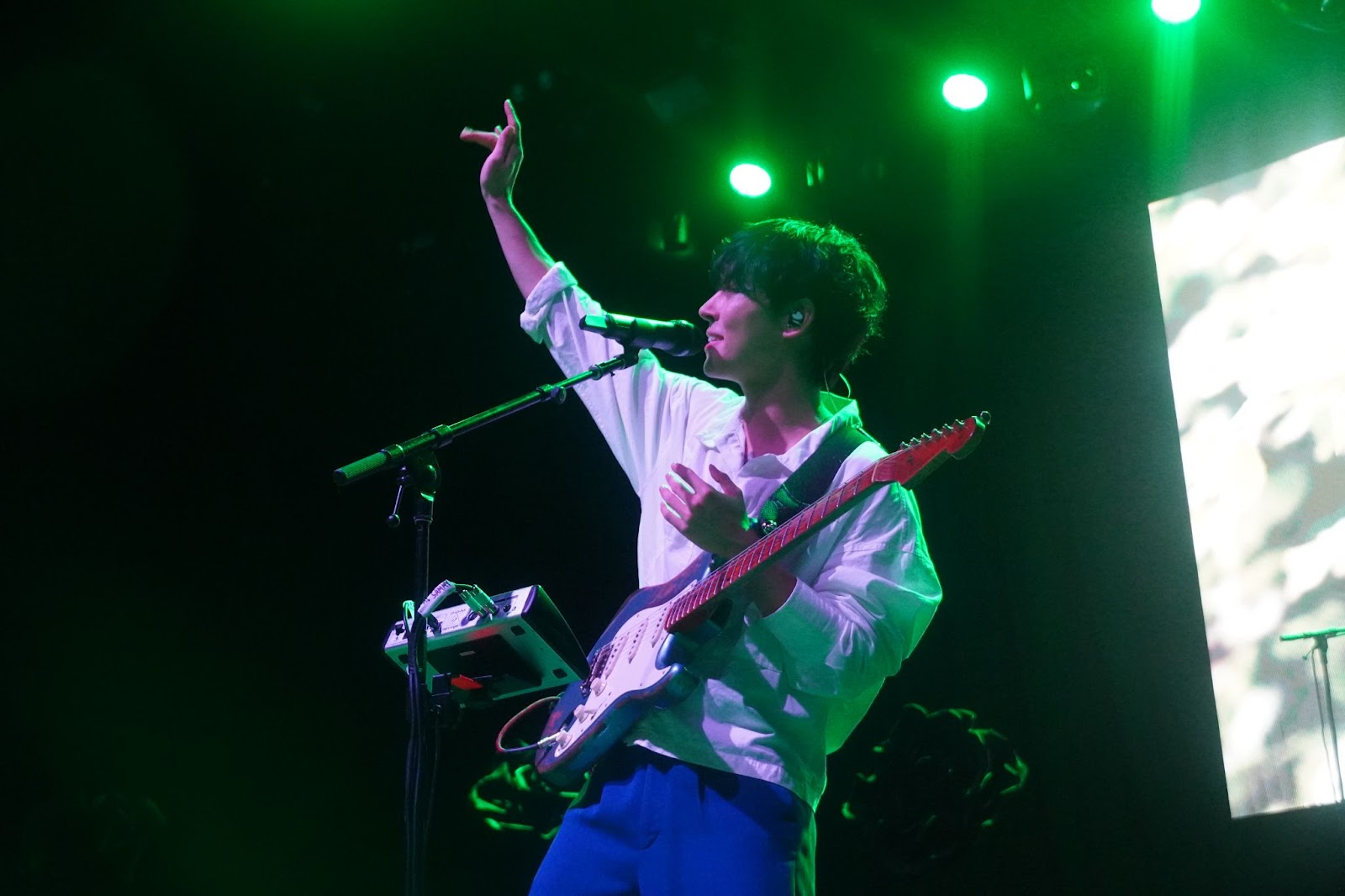 // Woosung at Roadrunner. Photo by Claire Liu and Jennifer Su.

The band begins their second break by responding to the high-energy environment of the audience, joking, “It’s so hot in here, I wonder why?” and admiring the vibrant red color of the lightsticks’ glow, which fans affirmed they had coordinated for the performance of “RED.”

Then, they transition into discussing the meaning and the process of making HEAL, accrediting the concept of the album to a week of talking and drinking together after they had a few years to “grow as individuals and mature as normal human beings.” Returning to their original reasons for making music, the members ultimately decided that healing is the main message of The Rose, stating, “we can heal together through music.” During the process of writing HEAL, fans were invited to submit personal stories around the theme of healing as part of the message of the album. Fans who were chosen had the chance to meet the band in Korea and hear their story told in the form of music.The songs in HEAL are made to revolve around the journeys of The Rose and Black Roses and exist as a source of musical comfort for listeners.

The album has also been an outlet for the members to make music around subjects they really want to talk about. Woosung points out that this is especially true for Jaehyeong, and a short clip is played from an episode of their newest series documenting the making of HEAL: The HEAL Project Ep. 2. After the video ends, Jaehyeong gives a heartfelt solo of “See-Saw,” a song about emotional change that he wrote to describe his own story and the struggles he has overcome. Near the end of the song, the members each sing and harmonize together with the lyrics, “Cause we’ll make it better.” 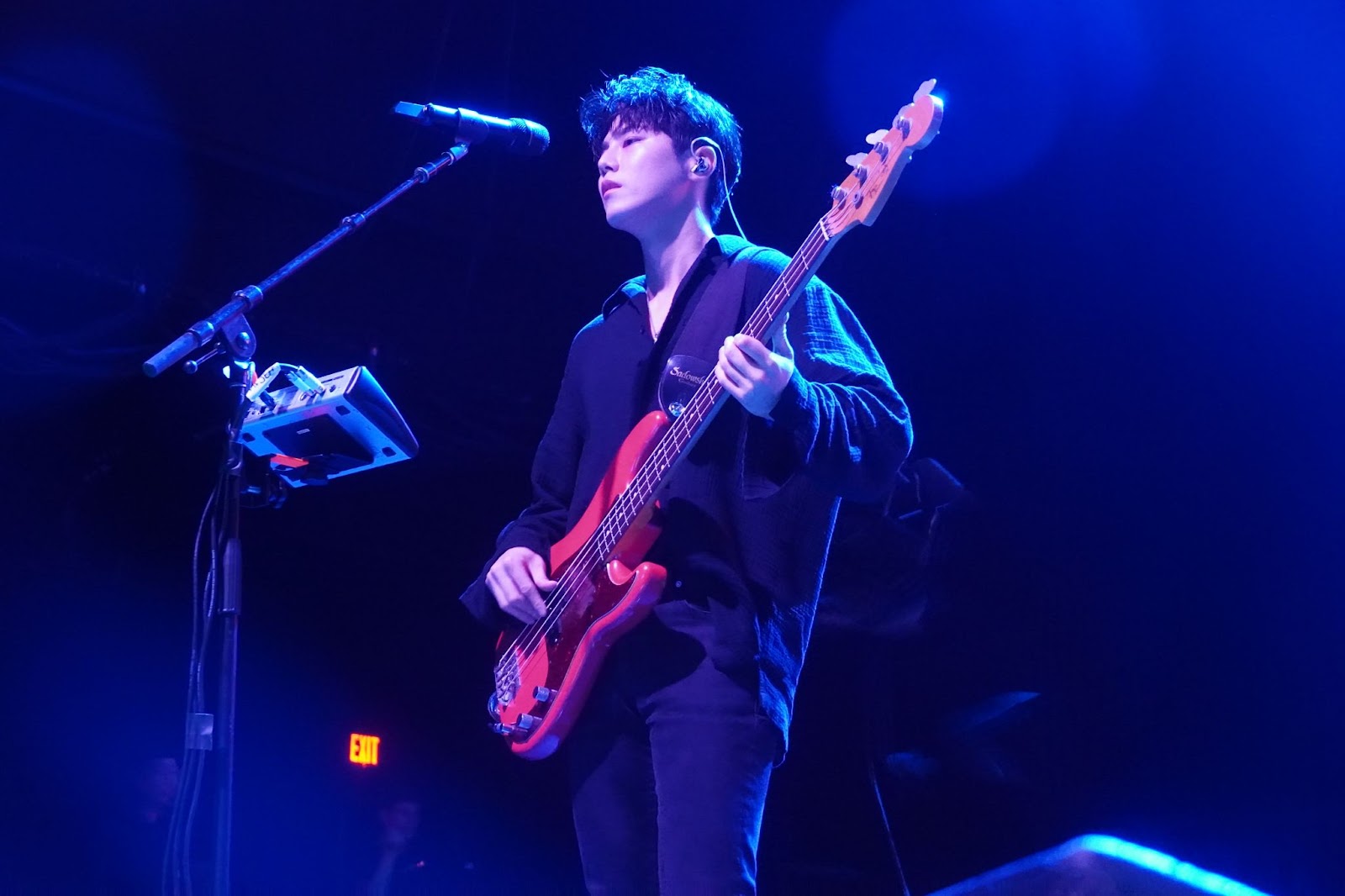 // Jaehyeong at Roadrunner. Photo by Claire Liu and Jennifer Su.

When the song ends, the members sit down on the edge of the stage, ready to continue. The performance is abruptly halted when the batteries for Jaehyeong’s guitar run out, but the energy continues as Woosung begins an improvised conversation with the fans. The other members chime in, bouncing around a whimsical energy as they joke about how everyone makes mistakes and the humanity it brings. 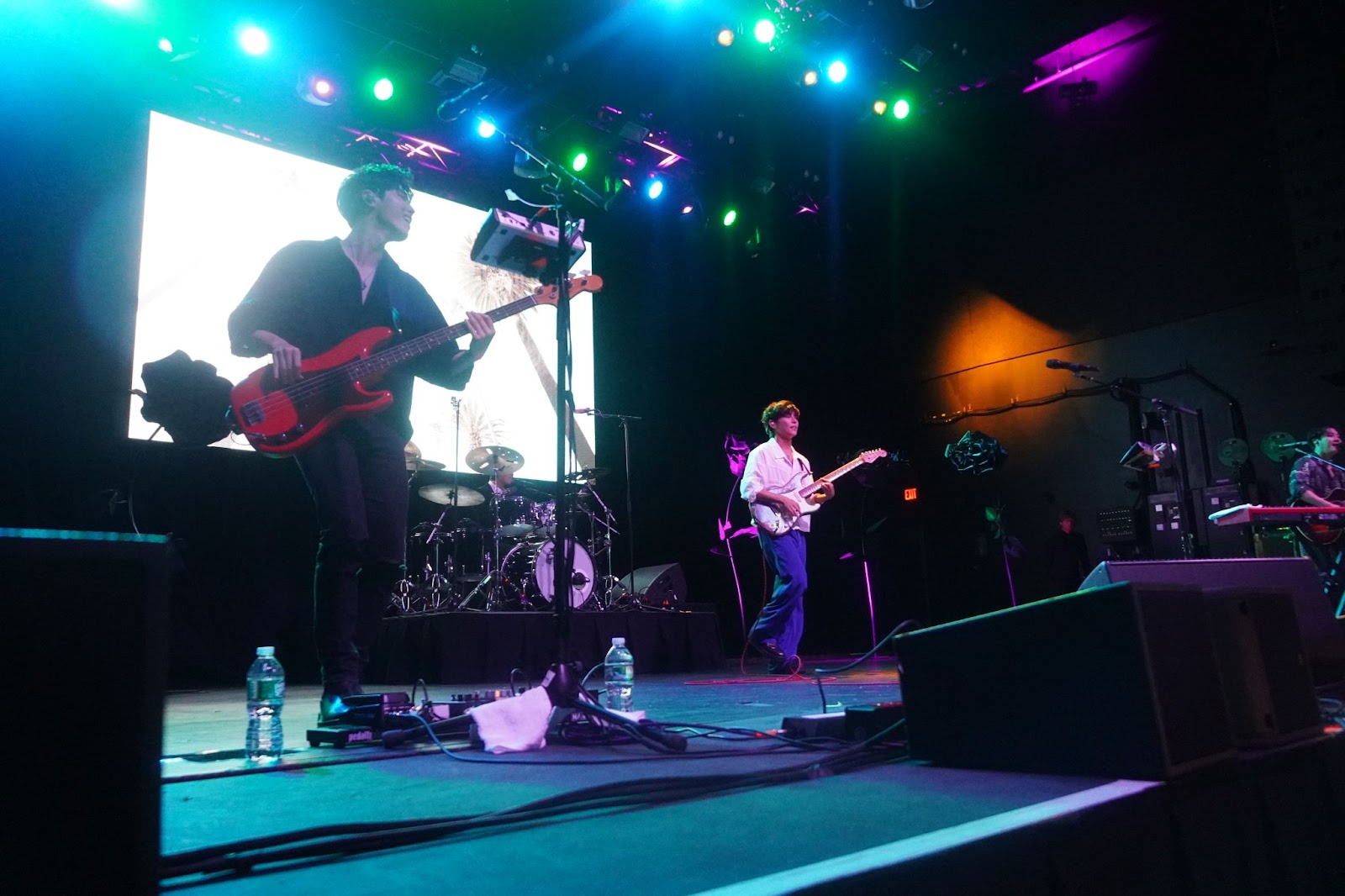 Once the batteries get replaced and the concert continues, everybody comes to the front of the stage to interact with fans with the song “Childhood”. The music slowly ramps up in energy as they start dancing around and hyping each other up during “Yes.” During a short break, Woosung mentions how when they first debuted, only 20 people came to their first performance and they would hand out candies to people on the street to invite them to come to their concert. After expressing their appreciation for all the fans who came out today, they give a nostalgic performance of their debut song “Sorry” and the last song they released before their hiatus, “Beauty and the Beast.” The concert closes with the powerful song “Sour” from their latest album, and the members shower the audience with thank you’s and promises to return to Boston before leaving the stage. 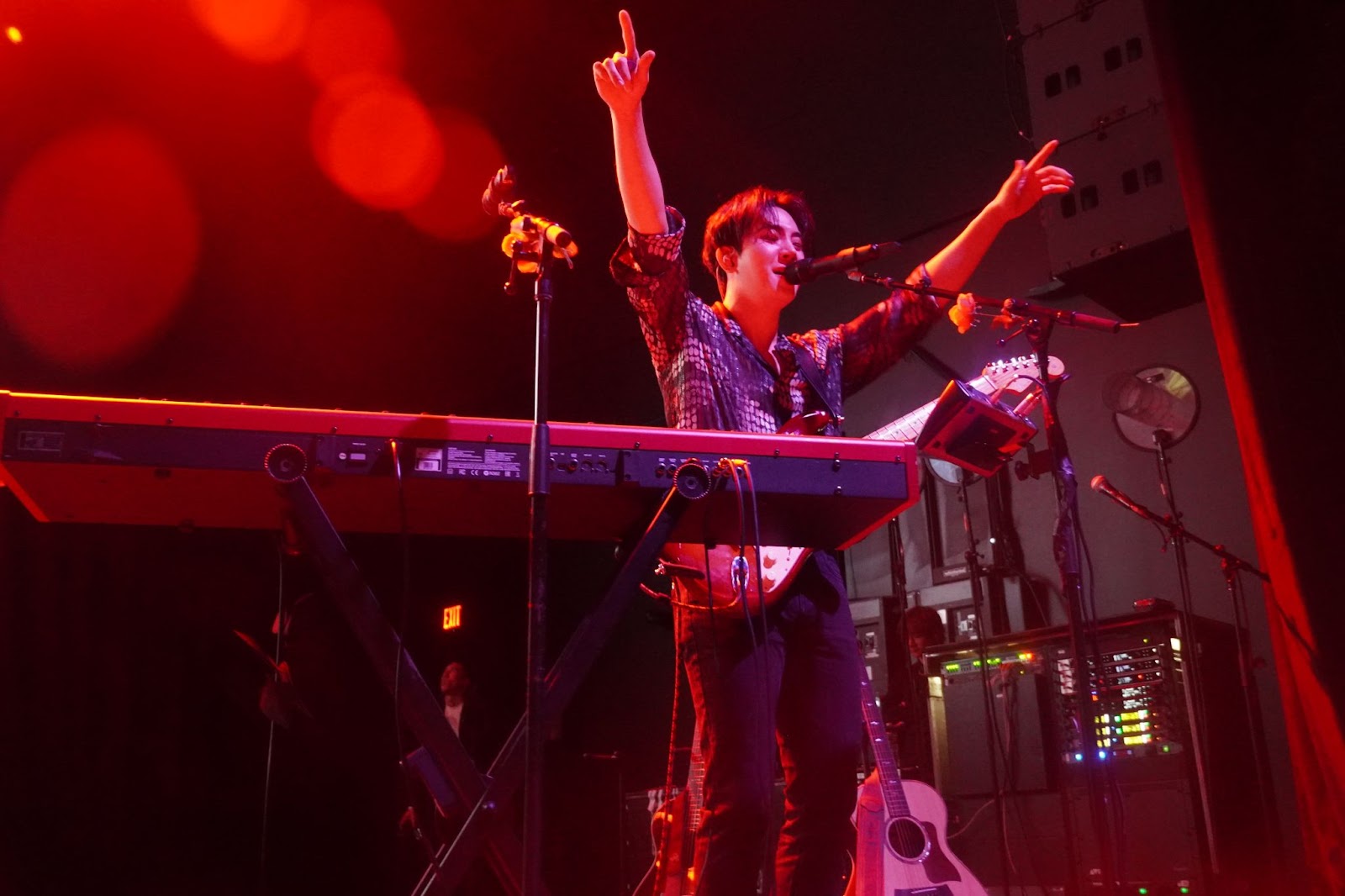 // Dojoon at Roadrunner. Photo by Claire Liu and Jennifer Su.

As pink lights flood the room, the members re-emerge from the wings without their instruments and dressed down in their tour T-shirts. Standing at the edge of the stage, they interact with the fans directly, catching flower crowns and wearing them as they jump around the stage. In return, the members begin throwing red roses into the crowd, pitching them up into the balcony and across the standing area. After taking some selfies and videos with the audience, The Rose takes their final bow and the dynamic, heartfelt concert comes to an end. 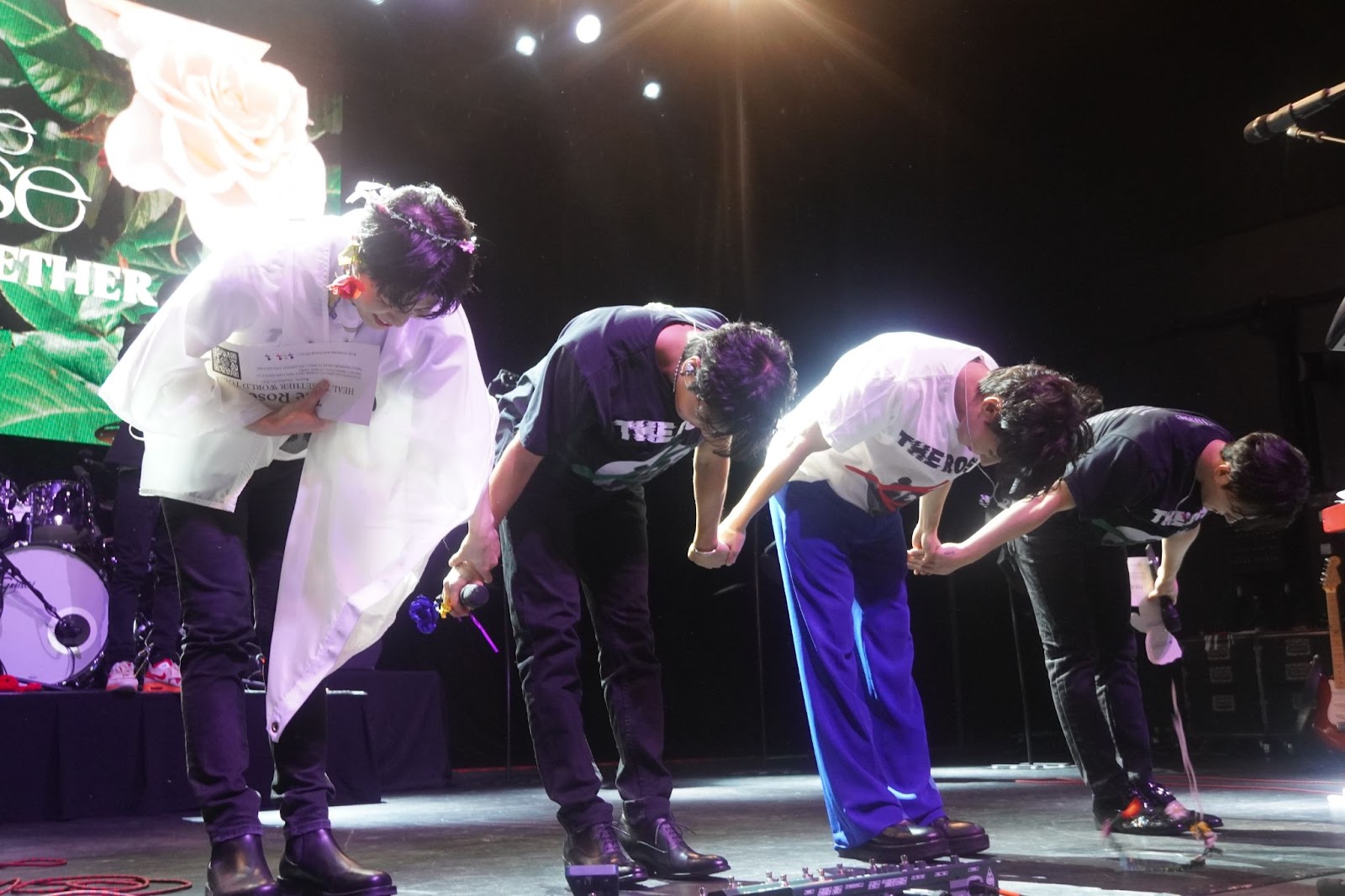 // Claire Liu and Jennifer Su are Staff Writers for the Record Hospital.