A Journey To The Center Of The Vada-Verse

// Image courtesy of The Garden.

On November 23, The Sinclair music venue transformed into something else entirely. A queer group of teenagers and college students, some of whom’s faces were painted like jesters, all of whom were clad in a dark color palette and Doc Martins waited in anticipation for their entrance to the Vadaverse. The bitter cold and impending risk of hypothermia were of no concern for these travelers as some arrived over two hours early to the venue in hopes of catching a glimpse of Wyatt and Fletcher Shears.

The Garden is an avante garde punk band created in the malaise of Orange County, California. The project was begun by two arguably identical twins, Fletcher and Wyatt Shears. Fletcher and Wyatt expressed that they did fit into Orange County, so instead of conformity, they created. Although their discography may appear like meaningless monologues on top of short drum beats and riffs, each song has its respective significance to the duo. “Vada Vada” is a phrase that The Garden coined, and its meaning matures with Fletcher and Wyatt and they continue self discovery. Ultimately, Wyatt summarizes the implications of “Vada Vada” with a short explanation, “Why strive to be a part of a scene when you can create your own? Vada Vada is an alternative reality that we put ourselves into so we don’t have to fit in.”

The show began with the nardcore punk band, Dr. Know. Dr. Know put on a show that was startling, reinvigorating, and captivating. The lighting and stage set up for this band was sparse; only Dr. Know’s instruments were on stage in addition to the standard white stage lights. In lieu of these effects, however, Dr. Know delivered a compelling performance. While other members of Dr. Know were relatively stationary on the stage, lead vocalist, Brandon Cruz strutted across the entire stage. Cruz delivered true hysteria and mania screaming on his knees, grabbing a drumstick to play with. The climax, however, was when Cruz began banging his microphone against his forehead – the result of which was a small trail of blood that stayed on his face for the rest of the performance. Between the dynamic performance and political minded messages, Dr. Know represented the spirit of punk. The choice of Dr. Know as The Garden’s opening act created a beautiful representation of the evolution of punk culture and where its boundaries are currently being pushed.

After Dr. Know, came a brief intermission in which the audience could reflect on the performance that they had just witnessed. This break was not without its surprises. As the stage got set up for the impending The Garden performance, the audience witnessed another character within the Vadaverse: Tommy Midnight. Standing right by the entrance to the stage, the crowd murmured attempting to identify the figure. Tommy finally emerged from the shadows and was met by thunderous applause as he helped set up the stage, testing the microphones and plugging in amps. Certainly, The Garden has garnered a loyal cult following over the years. For the many fans who studied their universe over the years, Tommy represented fleshing this to light.

At last, the main event: Fletcher and Wyatt shears strolled onto the stage. Finally seeing the duo in the flesh and blood, the audience went wild pressing forward in hopes of catching a more solid glimpse.

Wyatt, who played bass and vocals appeared dressed like Spirit Halloween’s take on glam rock. His studded leather coat and jester face paint contrasted Fletcher’s understated muscle tee and red plaid scarf. However, their respective outfits seemed to be the opposites of their stage presence. Despite his simple attire, Fletcher delivered hysteria to the show. In a level of mania that reveled in absurdity, Fletcher would step away from the drums to summersalt across the stage, leap over his drum kit, and swing the microphone. Wyatt, on the other hand, played more into the jester character deliberately delivering deranged dances while playing the bass. 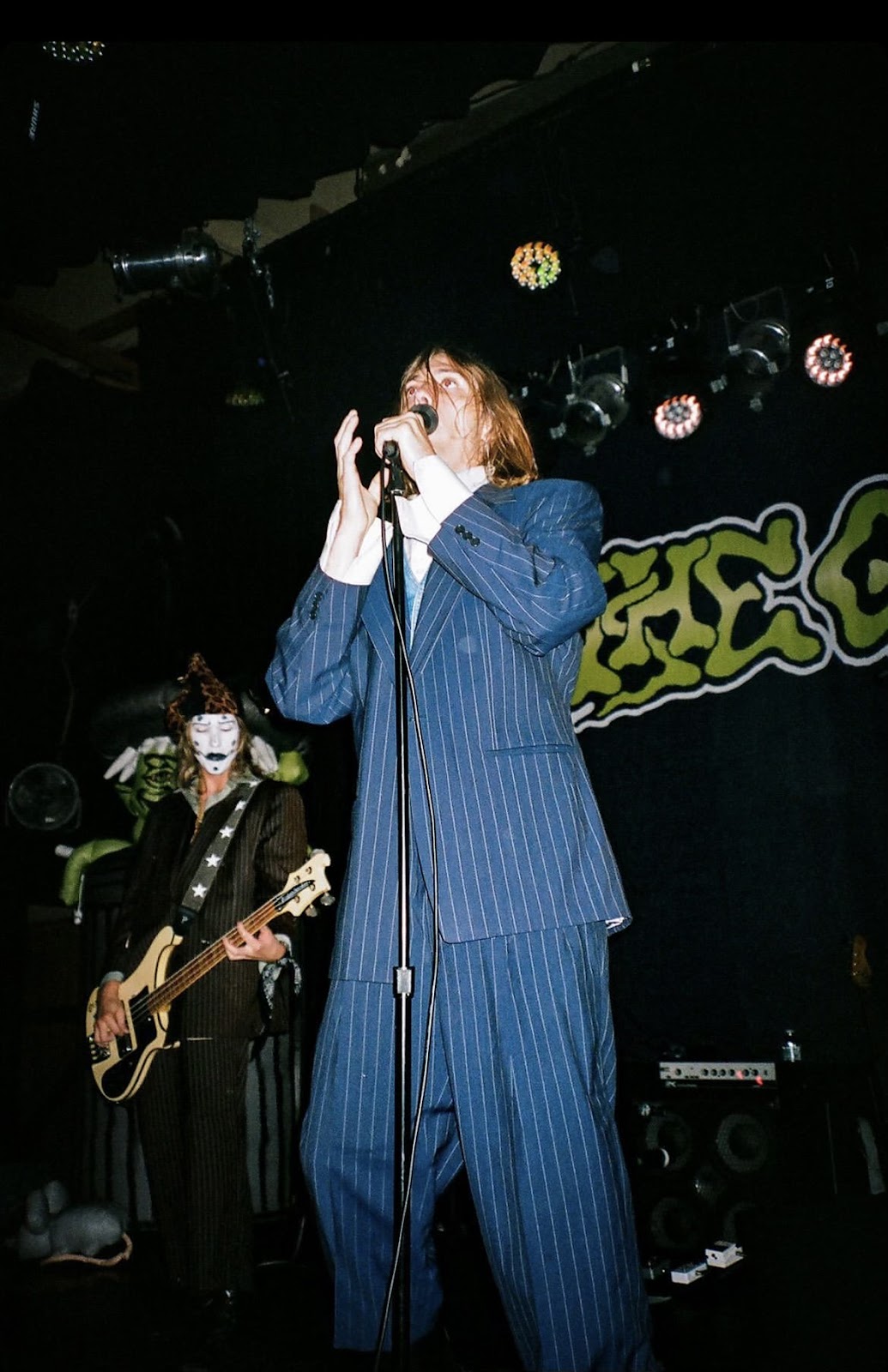 // Image courtesy of The Garden.

As each new song began, the audience’s frenzy was reignited. To all of their most popular songs – “Call This # Now,” “Egg,” and “Thy Mission” – the audience screamed along. Such a dynamic performance from Fletch and Wyatt posed the audience with a dilemma. Should they keep their eyes fixated on the stage so as to not miss a single trick, or should they participate in the moshing? What resulted was an intermediate between the two with the crowd pushing forward to hopefully greaten their proximity to the two but also enjoying the concert for what it offered.

At the end of their performance, several members of the audience waited outside in hopes of personally meeting the twins. The two people who emerged from the venue eventually were drastically different from their stage personas but all the more endearing. Wyatt and Fletcher stopped to take photos and talk to all of the fans waiting outside, responding to their compliments with a bashful thanks. Albeit a cliche, the highlight of the evening was the community that The Garden has created with their fanbase.

// Katia Soares dos Santos ‘25 is a DJ on the Jazz Spectrum and a guest writer for the Record Hospital.