Xenia Rubinos crossed herself and sprinkled water across the stage before beginning “Did My Best,” a grief-filled tribute to a person she lost and her final song of the night at Elsewhere in Brooklyn. She capped off an intimate and challenging evening with one of her most memorable songs, grounding her audience through direct and transparent vocals and a bed of swelling synthesizers. Throughout the June 3rd show, her and her band's sound had been cutting in and out, and despite many approaches to working though the difficulties, including performing acoustically and a capella, the issue never resolved. The biggest moments in "Did My Best" were marred by the quality of the speakers. Nevertheless, Rubinos delivered a moving performance, and connected deeply with her devoted audience. 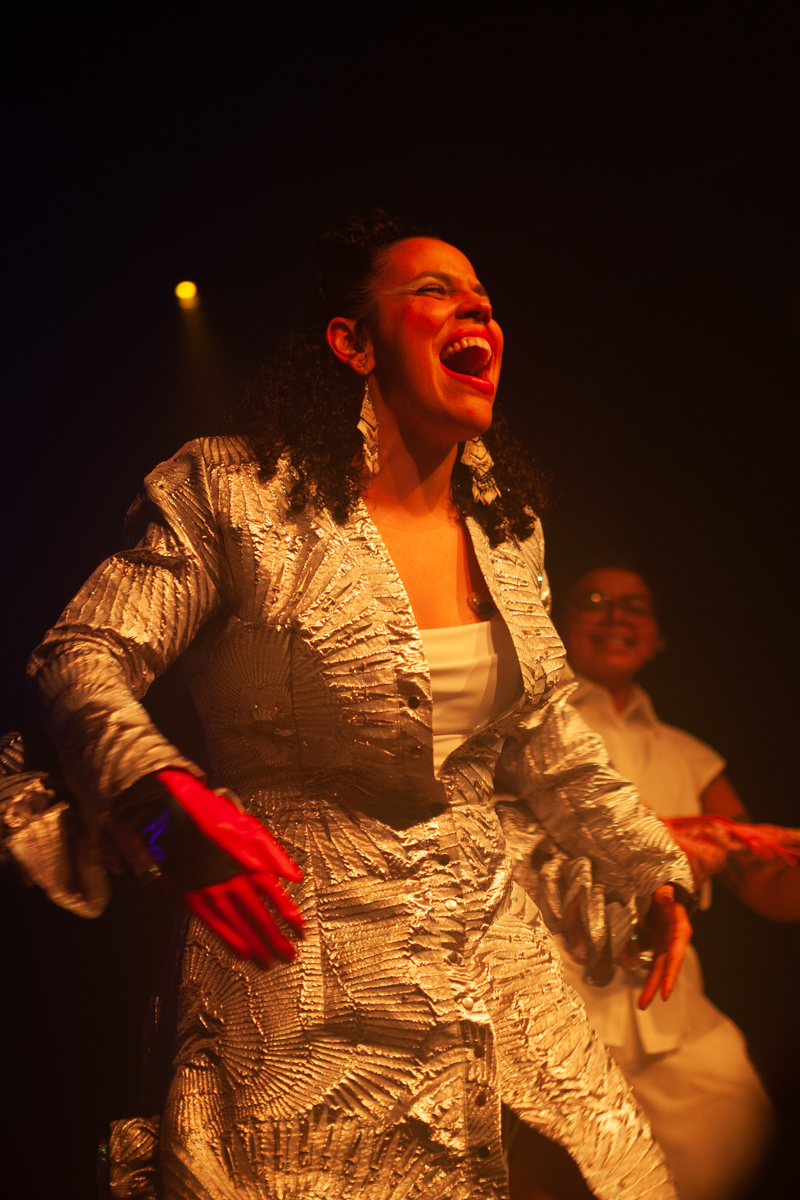 Rubinos broke through the barrier between stage and audience within the first song of her set. She leaned over the crowd, held up only by her bandmates pulling a cloth attached to a harness she wore. Technical difficulties presented an opportunity to expand on this balancing act between support from her band and interplay with the audience. For acoustic songs the crowd went silent—helping each other hear Rubinos's un-mic'd voice in quieter moments—save for sporadic yells of agreement and approval after lyrics that were particularly resonant. Rubinos’ voice alone carried across the venue as she traversed her full dynamic range, preaching to the crowd while her bandmates ran behind her trying to resolve the speaker issue. Between songs, she made announcements and apologies in English, but carried conversations with the crowd mostly in Spanish—audience members responded like longtime friends. 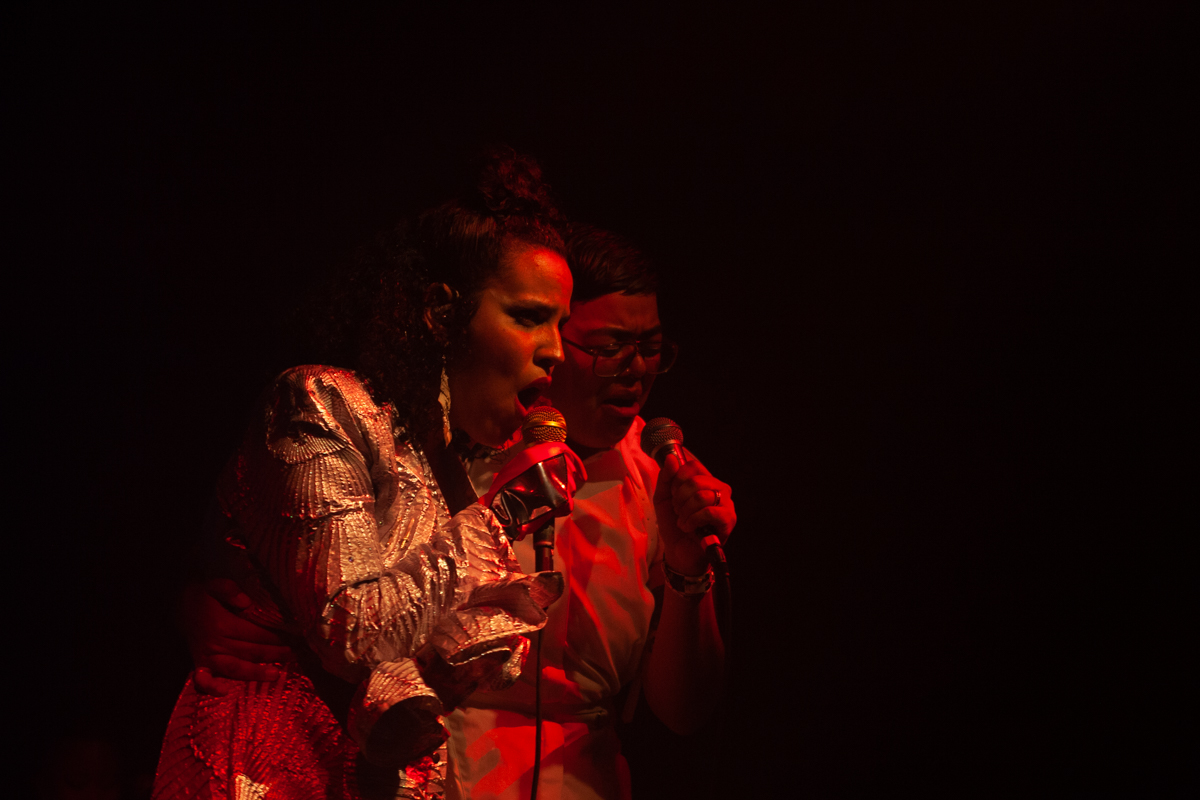 There were several notable pieces of choreography that were anchored by the closeness of the band, and in particular, between Rubinos and her primary backup singer, stefa marin alarcon. During a song that centered their tight harmonies, the two entwined their arms and stood together with their faces touching, side by side, as if to physically become one unit. Disappointed that they weren’t able to properly execute the show they had prepared, they turned to each other and the crowd to instead perform songs communally, with the audience chanting rhythmic backing vocals led by stefa and Elenna Canlas.

The visual strength of the show's costumes, lighting, and choreography was unhindered by the sound issues. As the show began, three ghost-like figures stepped onto the stage draped in white, processing slowly and generating audience anticipation. Rubinos then joined them, encased in a bubble-like material that was both costume and nest. Her band removed the layers to a huge cheer, and then uncovered themselves, signaling the start of their performance.

About halfway through her set, Rubinos removed a second layer—her ruffled, shin-length silver coat—revealing a tasseled white dress underneath that matched her bandmates' all-white costumes. The floor at Elsewhere slopes down as it reaches the stage, and as a result, when Rubinos leaned out over the crowd, spotlit, she seemed to be floating above us, as an angel might. 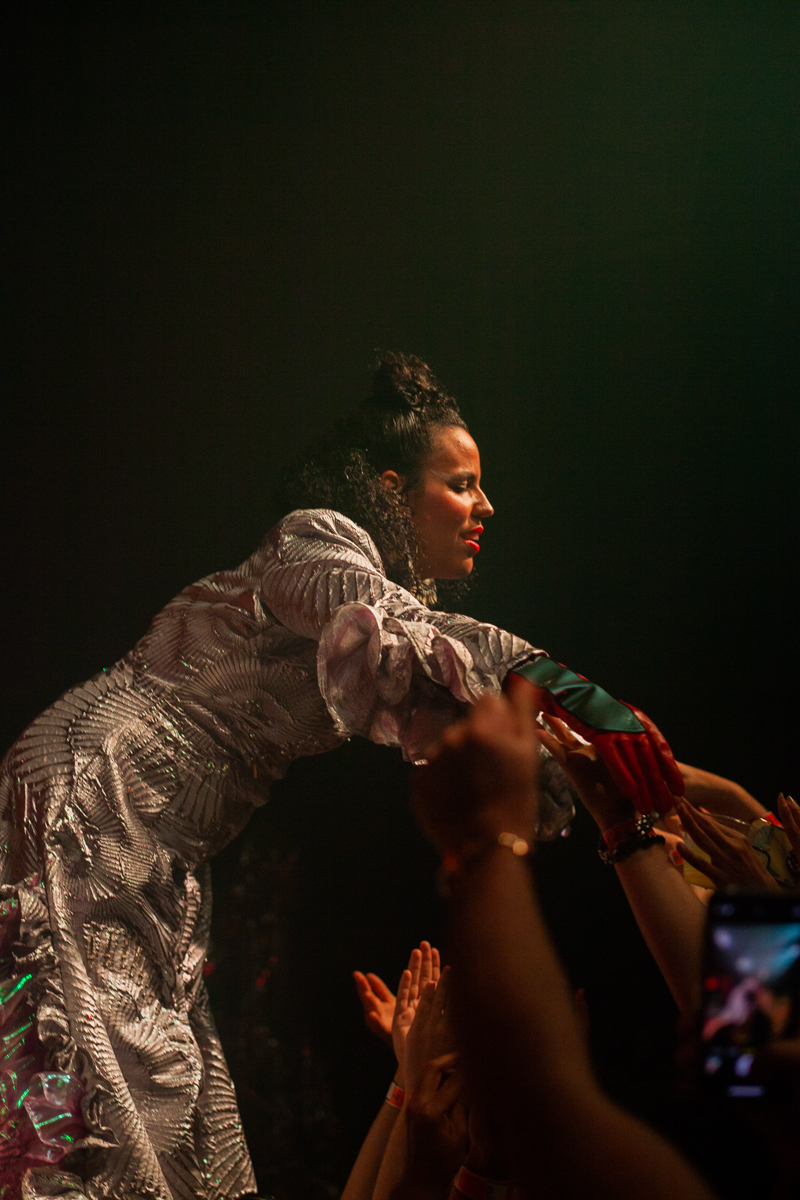 Rubinos is currently touring in support of her most recent album, Una Rosa, released in October 2021 on ANTI Records. The album is primarily electronic, so difficulties with the sound system were particularly disruptive. Rubinos first attempted to play through the patchy sound with a few songs from Una Rosa ("Ay Hombre," "Working All the Time," "Sacude"). She then shifted to a more acoustic approach, with a few songs from her earlier albums. For those, bandmate Marco Buccelli switched from the drum machine to the physical drum kit. She returned to the electronic backing for the final songs, ignoring the glitches as she completed her set with "Did My Best."

While her show was not what anyone—audience or performers—expected, it did bring her skill and personality as a performer to the fore. Her vocals had more range than is on display in her recorded music, jumping from a growl to a ringing climax within minutes of each other. Even more striking was the way that she balanced this musical rigor with a humor and charisma that shone not only between songs but in her vocal delivery.

At the end of the night, Rubinos and her three bandmates bowed together, taking a moment after a difficult set to appreciate one another and their devoted fans.